There are many excellent reasons for choosing to visit Tuscany. Many decide to spend their stay in Tuscany to be able to appreciate the extraordinary artistic and cultural offer, while others prefer a holiday in the nature of the splendid Tuscan landscapes.
Lovers of good food and wine lovers come to Tuscany to taste the simple and genuine flavors of local dishes and wines.
Those who love walking, on the other hand, choose the paths of the mountains, cyclists the curved hills, lovers of the sea the coasts and islands. Finally, foreign students choose Tuscany to learn the Italian language and culture.

There are so many interesting things to do and see in Tuscany that it is sometimes difficult to choose where to start. Certainly Florence, Siena and Pisa are among the main destinations, but the list of Tuscan "cities of art" is much longer and also includes Arezzo, Cortona, San Gimignano, Lucca, Volterra, Pienza, just to name a few. 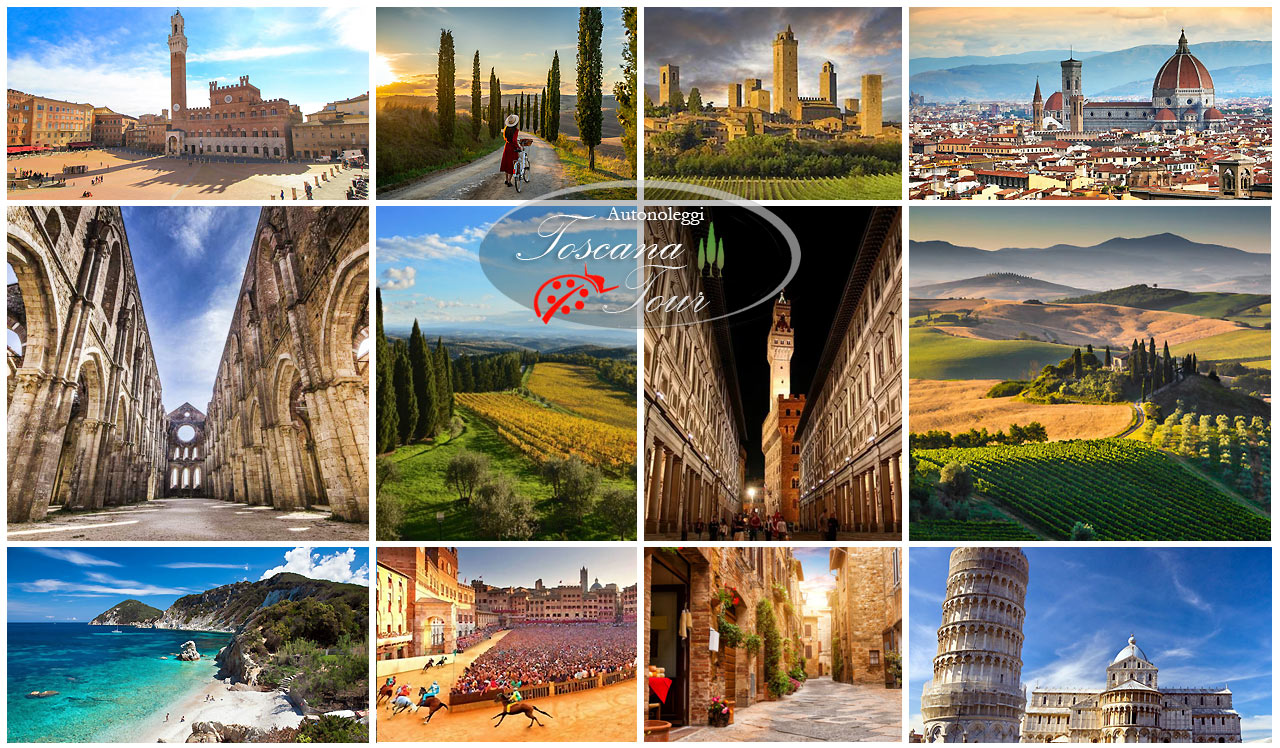 TOSCANA TOUR operates in the granturismo minibus rental sector, our vehicles are equipped with all the comforts needed to travel in complete safety and comfort. Our strength are the magnificent places in Tuscany where we will take you to discover beautiful cities of art and wonderful landscapes. 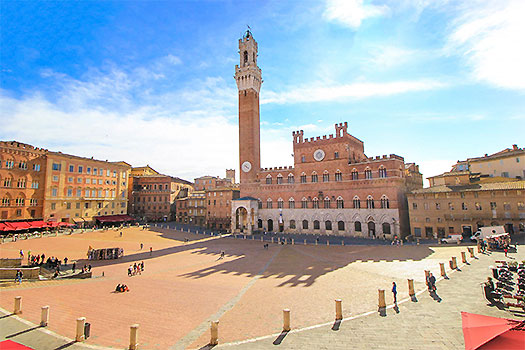 "There is nothing like Siena in our world", said Bernhard Berenson, who describes it moved as a unique and complete medieval city, between the hills of Chianti and the Crete of Val d'Arbia. The city is universally known for its huge historical, artistic and landscape heritage and for its substantial stylistic unity of medieval urban furniture, as well as for the famous Palio di Siena. For these merits, in 1995 its historic center was awarded the title of World Heritage Site by UNESCO. Siena has a long culinary tradition, perhaps also due to the richness of the medieval period and the presence of numerous inns and hospitality points along the Via Francigena. In recent decades there has also been a search for ancient medieval dishes, as in many areas of central Italy. the typical sweets, among which the famous Panforte, the Ricciarelli, the pan co 'santi, the copate, the cavallucci and the berricuocoli. The wines produced throughout the province and celebrated all over the world, including Chianti, Chianti Classico, Chianti Colli Senesi, Chianti Superiore, Vino Nobile di Montepulciano, Brunello di Montalcino and Vernaccia di San Gimignano. 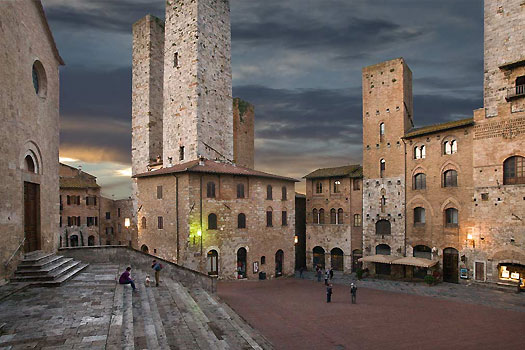 San Gimignano, the famous medieval village with beautiful towers, in the heart of the Tuscan countryside in the province of Siena.
From wherever you arrive, San Gimignano stands on the hill, 334 meters high, with its numerous towers.
Even today there are thirteen of them. It is said that in the fourteenth century there were seventy-two of them, at least one for each wealthy family, who could thus show their economic power through the construction of a tower (many are still visible in the body of the buildings although "scamozzate").
For the characteristic medieval architecture of its historic center it was declared a World Heritage Site by UNESCO. 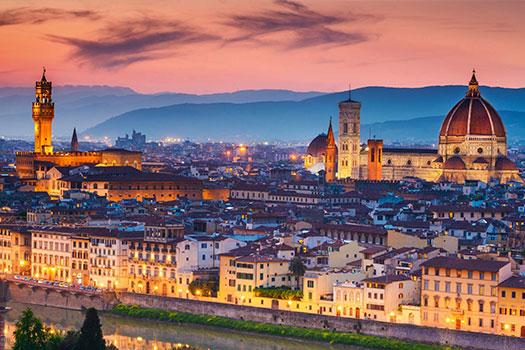 Important university center and UNESCO World Heritage Site, it is considered the place of origin of the Renaissance and is universally recognized as one of the cradles of art and architecture, as well as renowned as one of the most beautiful cities in the world, thanks to its numerous monuments and museums - including the Duomo, Santa Croce, the Uffizi, Ponte Vecchio, Piazza della Signoria and Palazzo Pitti. Florence is located in a scenographic position, in the center of a large amphitheater basin, surrounded on three sides by enchanting hills, The plain where the city stands is crossed by the Arno and by minor waterways such as the Mugnone, the Terzolle and the Greve river.
The center of Florence with its hundreds of businesses is a paradise for shopping and leisure, from elegant high fashion boutiques and historic cafes to lively historic open-air markets, as well as hosting numerous nightclubs, discos, American bars, lounge bars and meeting places for an aperitif. 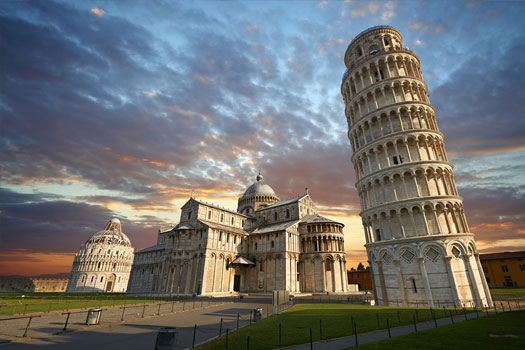 Pisa is much more than the famous Leaning Tower and deserves a longer visit than the irreplaceable stop at the beautiful Piazza dei Miracoli, a UNESCO heritage site. Ancient Maritime Republic, Pisa is a city born and raised along the Arno axis. The inlets of the river make the view of the Lungarni and the buildings overlooking them suggestive and never equal to itself. Among others, Byron, Shelley, Montesquieu, Leopardi, Carducci, D'Annunzio and Foscolo wrote about the charm of the Lungarni of Pisa. Pisa is the city of Galileo Galilei, which gives its name to its important international airport and whose fourth centenary of the first astronomical observations was celebrated in 2009. Stopping in Pisa allows you to enjoy a city on a "human scale", to be lived "slowly", populated by many young people who love, starting from the warm season, to find themselves on the "shoulders" of the Arno. 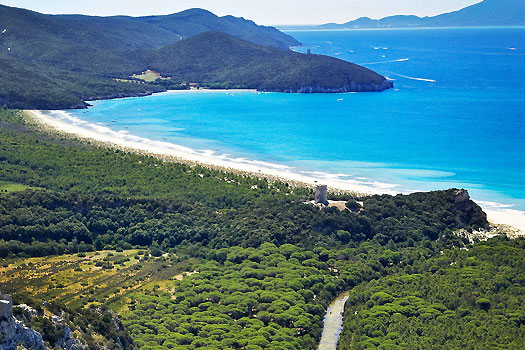 A rugged and wild chain of hills, which descends towards the sea with sandy beaches and cliffs ... surrounded by swamps, pine forests, cultivated fields and pastures. For many, Maremma is the land of the Butteri, wild horses and large white long-horned cattle. Surely the most appreciated feature of the Maremma are the beautiful coasts and the crystal clear sea. The coarse and almost black sand beaches (Montalto di Castro) give way to the rocks of the Argentario and the fine white sand of the Feniglia, Osa and Talamone. In Maremma, along the Fiora river valley, the Italic civilization with the first city of Italy Saturnia arose, even if today it is perhaps much better known for its thermal baths and waterfalls of hot water at 37 ° C. Some of the most important Erusche cities have arisen in Maremma. 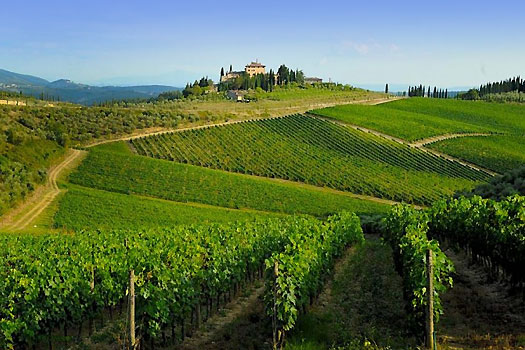 The Chianti area in Tuscany is one of the areas of the region best known and appreciated by visitors from all over the world.
Chianti offers to those who visit it a succession of unique landscapes, characterized by gentle and green hills, large expanses of vineyards and olive groves, small villages, characteristic churches and stone farmhouses.
The Chianti landscapes are so beautiful and particular that they are often photographed and reproduced in postcards and calendars distributed all over the world. 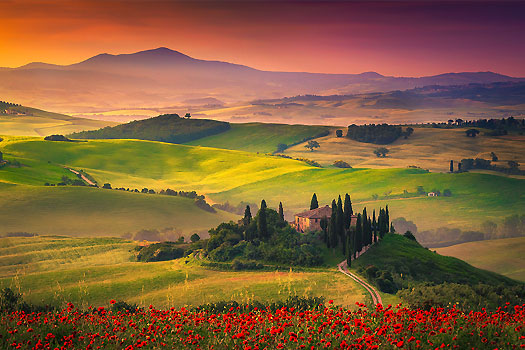 An authentic treasure trove of nature and landscapes, the Val d'Orcia is home to some of the most interesting historic centers of the Sienese and the whole of Tuscany. The Val d'Orcia has traditions in its villages and monuments that have almost disappeared in other places., Has an economy still linked to agriculture, with its inhabitants entirely dedicated to working the land and the raw materials it offers. On the hills, villages and isolated monuments of extraordinary charm, oak woods, olive groves, the vineyards where Brunello and the other great wines of this part of Tuscany are produced. To the west, Monte Amiata, the highest extinct volcano in Italy, closes the landscape. But the emotion comes first of all from the hills. Because first of all the Val d’Orcia is nature. To visit the villages of Castelmuzio, Castiglione D'Orcia, Montefollonico, Monte Oliveto, Monticchiello, Petrolio, Radicofani and Bagno Vignoni. The Church of Sant'Anna, the Church of Sant'Antimo and the Church of Spedaletto are also beautiful. There are numerous itineraries to be covered on foot or by bike, while one of the most important events is the Val D'Orcia Festival. This is the panorama of the Val d'Orcia, a mixture of nature and picturesque villages of the Tuscan countryside. 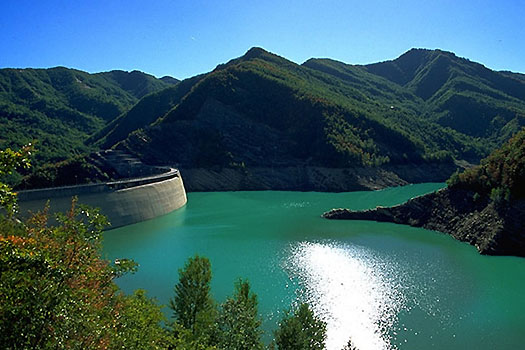 The Casentino is a small world that climbs from Arezzo to the sources of the Arno: it starts wide with the river that widens, then begins to squeeze between the Apennines, covered with chestnut and maple woods and dotted with churches and castles. Casentino is a fragrant land full of memories, it is a proud and robust people, it is a fabric or a cloth as they say here, which brings with it the history, the robustness and the ardent colors of autumn. It is a land that has experienced the centuries-old battles between rival municipalities, famous is that of Campaldino narrated by Dante Alighieri in the Divine Comedy The Casentino offers many places of great interest. One of the main ones is the convent of VERNA, founded by Francis of Assisi in 1214, where the Saint stayed and received the stigmata. It is a complex of structures of great historical and religious interest. Another place to visit is CAMALDOLI, seat of the homonymous monastic order founded by San. Romualdo in 1012. Here you can admire the monastery and the hermitage. In Casentino there are many possible itineraries… Naturalistic and Archaeological… Art and Spirit… Each of extraordinary beauty! 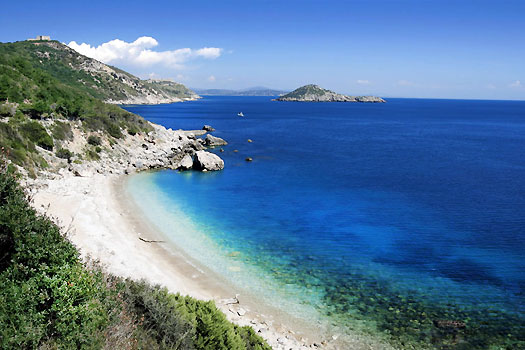 Tuscany, with its 633 km of coastline is washed by the Ligurian Sea to the North and the Tyrrhenian Sea to the South and with the islands of the Tuscan Archipelago, is an excellent destination for seaside holidays both for Italians from other regions and for foreign tourists. The Tuscan coast combines natural beauties with the comforts of a welcoming and hospitable region, which make it the ideal destination for enjoying relaxing and peaceful holidays all year round. The Tuscan coasts are very varied and can be either a clear and very fine beach or rocks overlooking the sea. The Tuscan archipelago is largely a national park and consists of several islands. The main island, known by all, is the Island of Elba. Other smaller but very beautiful islands are: Giglio Island, Giannutri, Capraia Island, Gorgona Island, Pianosa Island, Montecristo. The Island of Elba can be reached by ferries departing from Piombino. The island of Giglio and Giannutri can be reached by ferries departing from Porto Santo Stefano. Capraia and the Gorgona can be reached by ferries departing from Livorno.

... and many other wonderful places to discover, contact us